From Operate to Activate. How to Scale Your Leadership Impact.

Early in my leadership career, I was known as the expert. I was one of the first few employees in an Australian startup for a global company. I had a very small team. I needed to become the expert in this new domain so that I could teach my team, of then three people, what they needed to do.

My expertise grew and grew and grew. The team got bigger as well, but I was still ‘the’ expert for the organisation. In fact, I was one of the recognised thought leaders and experts in this space in the country.

My team and I delivered on everything.  Projects, KPI’s, product rollout. We were a very high-performing part of the business.

As my team grew, I became very busy. Because I was the expert, my boss came to me for everything, as did my peers and stakeholders. I was a bottleneck because everything came through me. I was also working incredibly long hours, was stressed, and hadn’t had a holiday for too long.

In retrospect I know I wasn’t leading at all. I was being highly reactive rather than strategic. I was focused on task, rather than people…and paying the price for that. Yet, my team and I were still seen as high-performing.

My focus was on getting things done. I was in the operate space. I was focused on the task, using my expertise to ensure completion. Of course, over time this became challenging as my team grew. I knew I needed to get out of this 1 of 1 space, where the only difference I could make was as me completing the task. My capacity was one. My ability to make an impact was of one.

I was also in participate mode with other members of my team and the broader organisation, so that I was collaborating with others on bigger projects and products. That provided a people dimension but ultimately I was still contributing as 1 of many, based on my domain expertise.

And don’t get me wrong it’s important to have people in the operate and participate spaces, who are using their expertise to contribute.

But as a leader, this limited my ability to have an impact, to make a real difference.

More time passed and my team grew larger.  I needed to step away from the doing and from being the expert, and into leading.

It was not the easiest transition because I was very good at what I did. And letting go of being the expert was hard. Yet in order to become a better, more impactful, leader, I needed to move above the line into the leadership space.

It’s like being a musician who has mastered their instrument, to perform a symphony you need to stop playing your instrument and start conducting the orchestra. 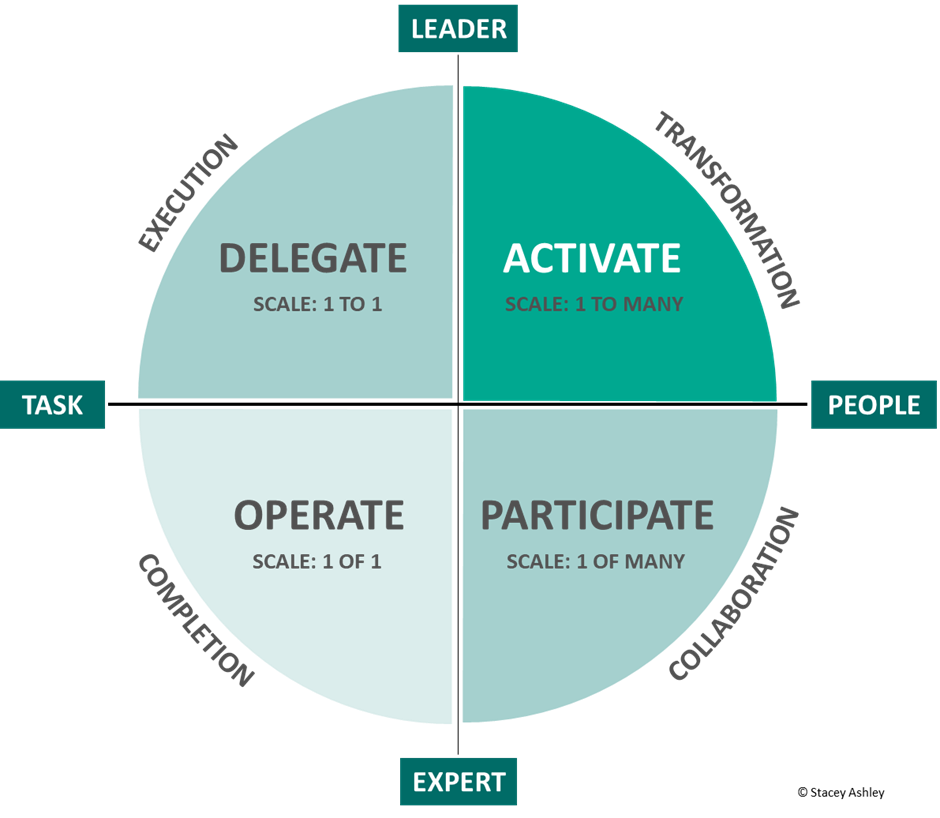 When I started that move towards leadership, my focus was on task. I would delegate. I would give instructions and guidelines and guidance on how a task was to be executed.  My focus was on execution. And so, while I was contributing to the leadership space, I was working in this one-to-one approach. And I still relied to some degree on my expert knowledge of the domain.

At that time I didn’t have a role model to learn from. No leadership training.

Eventually, I figured it out on my own … I moved from being the expert to being the leader, and I changed my focus from task to people. And that changed everything…..

When I changed my focus from task to people, when I introduced a leadership coaching approach, that allowed me to activate my people. It created the opportunity for change. No longer needing to be the expert meant I could make a bigger difference. I could scale my leadership. I moved from a capacity of one to a capacity of many.

My people were the experts, my job as the leader was to use a coaching approach to bring out their best. To enable, empower and scale. I was coaching people to step up and show initiative, to create their own opportunities, to work in their strengths. Creating opportunities for them to learn and grow, ready for next time.

When you activate your people, when you enable them and empower them, when you set expectations that they strive to achieve through the choices they make and the work they do, and you hold them accountable to their choices, that’s when you create the potential for transformation.

If you want to make an impact as a leader, move into the space where your leadership focus is on your people and how you activate them. Develop a one to many approach by using a coaching approach, rather than relying only on your own expertise.

Tap into the incredible suite of resources in the people around you. Rather than a capacity of one, scale to leverage the capacity of many. Coaching is the approach that enables you to create transformation in not only the way you work, not only the way your team works, but how your organisation works and the impact that you have on the whole.

And if you don’t know how to coach yet, learn.