How do I figure out what to do right now?

Let’s talk about some of the practicalities of being a leader at the moment when we still have so many unknowns in the situations that we are leading. Whether you’re leading yourself, whether it’s your team, whether it’s your organisation, there are still a lot of unknowns. There is not a lot of clarity about what the world will look like in a year,  two years, or three years. The world of work and business and leadership will never be the same again.

One thing that is clear though, is that leaders must keep leading

I’m going to recap the three general types of leadership responses that we’ve seen during the COVID pandemic conditions. Then I want to talk to you about how you might be able to find a way forward to knowing what to do now.

I’ve been speaking to many leaders, across many different industries, and regardless of where in the spectrum of industry and business impact you are it’s been pretty challenging for leaders to figure out what to do.

“The pessimist complains about the wind. The optimist expects it to change. The leader adjusts the sails.”

This has resulted in three primary types of responses from leaders to this situation.

So our timeline starts in approximately March 2020, and heads out for the next 3 years or so to March 2023. Any kind of significant change takes years to impact. Sometime between now and then, there will be a point at which most teams and organisations are going to either survive or not. It could be 12 months’ time, 18 months, 24 months, who knows? It’s in the future. That’s all we know.

Depending on how we respond as leaders to the present conditions will determine whether we make the survival line. Whether we take our teams and our organisations through to survival. Whether we’re set up to be able to thrive, to exist, or to, in fact, not survive at all.

So the first kind of response is the Freeze response. These leaders don’t know what to do in response to the crisis,  and so they aren’t doing much. They are frozen. They haven’t really known how to take action. This is a fright response. It could be the fear of doing the wrong thing, as well as not knowing what the right thing is to do.  And so what that means is they’re not taking a lot of action now. As a consequence, there is no readiness. There is no thinking about strategically what do we need to be able to do in the future. A sustained freeze response is likely to result in teams and organisations not making it to the survival line.

Then we have leaders who are taking action, though often without a clear purpose which results in kneejerk reactions. Often these actions are contrasted with periods of inaction from day to day. Or the actions work against each other. It’s a case of I’m not sure what to do. I’m busy though it’s not moving us forward. It is keeping us in the same space. This kind of response has action, but it’s not necessarily directed action or focused action. It’s a bit of this and a bit of that. Often the focus is to try and look after ourselves and make sure we’re okay. (think ‘hoarding’) It’s not necessarily a lack of good intent behind it. It’s just a lack of knowing what to do in order to actually be able to prepare for the future.

This approach to leadership means these organisations, will likely survive. They will hit the survival line in the future, and they’ll basically be in the same place that they started.  So they’re not ready to take advantage of any opportunities that are going to exist in the new future, in the world as it will be.

Then we’ve seen a third leadership response. For some leaders, we saw this response kick in immediately in the early days of quarantine and isolation. For other leaders, they have moved through different responses and are now moving into FIGHT.

Whenever it happened, these are the leaders who are taking constructive action, strategic action, which may be about how to consolidate their organisation right now, so that it will survive. It may have included making decisions about standing people down, other cost-cutting measures, changing their strategic direction, reorganising and so on because they want an organisation that’s going to be positioned, ready to take advantage of opportunities in the future when they reach the survival line.

Leaders have looked at the options and opportunities right now and for the future. So it’s not just about making decisions and taking action for now. It is about being prepared for the future. So these leaders are getting ready. When they reach the survival point, options will be there and they will be able to take advantage of them.

If you reflect on the state of your own leadership, which state are you currently in? 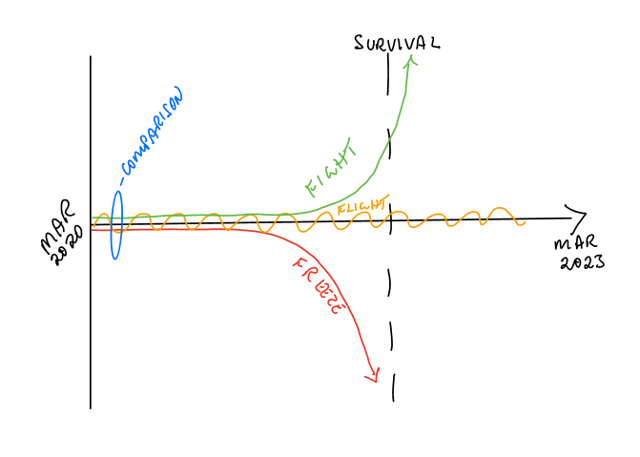 If you look at this model, what you notice is although those 3 leadership responses look quite similar in the early days, over time the impacts of the different responses really show up. As a leader, you want to be doing as much as you can now to ensure that your team and organisation not only survives, it is also set up for the opportunities of the future.

The challenge though, I’ve observed, is how do you know what that should be?

There are some people who have stayed in their zone. They’re in a freeze state or they’ve been consistently strategic in fight mode. More often though, what I have found is that leaders largely have a strategic direction, but on a given day, they may feel like, “I actually don’t know what to do.” So they get into that freeze state for a moment in time and are not sure what the right thing is to do.

There are some people who have stayed in their zone. They’re in a freeze state or they’ve been consistently strategic in fight mode. More often though, what I have found is that leaders largely have a strategic direction, but on a given day, they may feel like, “I actually don’t know what to do.” So they get into that freeze state for a moment in time and are not sure what the right thing is to do.

Here is a quick technique to help you break that pattern and figure out the answer to ‘what do I do now?’.

You can use this across a range of focus areas. If you don’t know where to start, use this simple process. You can do it by yourself, you can collaborate with your team.

For example,  you might need to figure out what to do with your current projects. So ask these questions:

🚦RED – What projects should we stop?

🚦AMBER – What projects should we continue?

🚦GREEN – What projects should we start?

This approach gives a great basis to be able to figure out what to do. What do we stop? What do we continue, and what do we start?

You can apply this approach to many things.

For example- your strategic plan. Is it still relevant? Ask the questions:

🚦RED– What in the strategic plan does not make sense anymore? What do we need to stop?

🚦AMBER – What are the things that we need to continue because they make sense and we need to do more of that?

🚦GREEN –  What are the new things that we need to introduce? What do we need to start because of the changes and new conditions?

Other areas you could apply the traffic light approach to include: 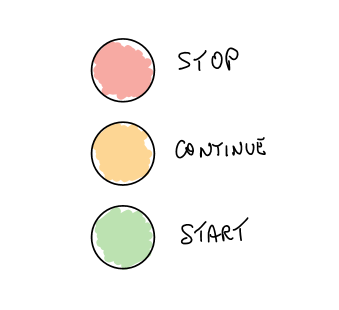 This is a simple, yet powerful, technique to help you to get out of a freeze state or out of a flight state with no clarity. If you need to know where to start, and you’re not sure, then use this simple traffic light approach. What needs to stop, what needs to continue, what needs to start?

You can apply this for yourself, your team and your organisation. And remember you don’t need to do this alone. Bring your team and colleagues into the process so you can leverage the collective experience, expertise, and ideas.

Leaders need to be leading.  Making decisions, taking action, and providing direction to the people around them. Everyone is looking for leadership right now.