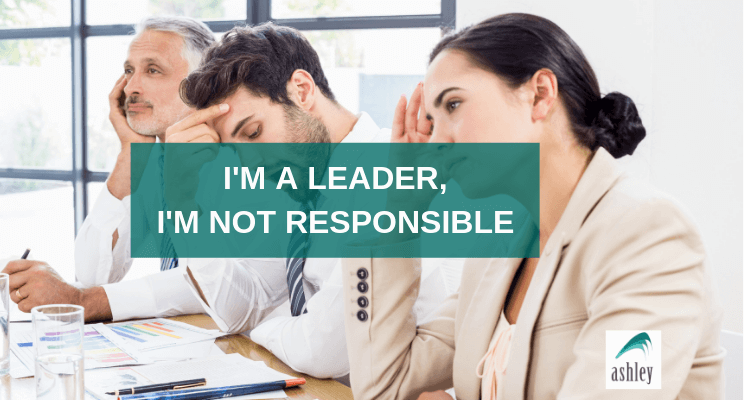 I’M A LEADER, I’M NOT RESPONSIBLE

It’s very easy as a leader to believe that you have complete responsibility for making everything just right. Perfect. Easy for everybody else in your team to be able to perform their roles.

And yes, you do have significant responsibility to set the vision, and to create the culture. To create the environment that allows people to thrive, and to perform at their best, and to use their strengths, and so on and so on. But each person has to play their part as well.

I remember, looking back to a time in the middle of my career, that I had been working really hard to build and develop my team, which has grown significantly. Doubling from 35 to 70 people in only a few months. I really wanted to make sure that we had a great culture. That I was supporting all the people in my team as much as I possibly could, because we had some really big programs and projects to deliver.

I was working incredibly long hours trying to do my day job, and also lead this big transformation. I remember that one of the things that was really important to me was communicating. Making sure that the people in my team really had a good sense of what was happening in the rest of the organisation. That they understood how we really fitted in and the role that we needed to play in all of the different activities that were going on. How we contributed and how we participated.

And so one of the things that I would do is, each Friday morning I would have a stand up meeting with my whole team. Just 15 minutes. I would share an update about all of the things that I had learned in the leadership team meetings during the week that were relevant for my team.

And on this one particular Friday morning, as I was sharing this key information, I noticed that there were a few people who were talking among themselves, and not listening to what I had to say.

I was just so disappointed, and so disheartened that I had been basically slaving away for the last six months, and still made the effort and took the time to make their jobs easier, to make sure they were informed. I didn’t have to spend the time doing this. I simply thought it was the right thing to do…part of my role as a leader. And these people didn’t even have the respect to listen to what I was sharing with them, for them.

Anyway, the meeting finished up, and I went back to my office. A few minutes later, a couple of other members of my team came in and they said to me, “You know, we really appreciate what you do to make sure that we have everything that we need to be able to do our jobs. But you know, it’s not only up to you, it’s up to all of us as well.

What a great thought. It’s not up to me to motivate them. It’s not up to me to be responsible for their performance every minute of every day. Each person in my team has to do that for themselves. And it was a real ‘aha’ moment for me, because it meant that I could let go of a massive burden of responsibility that I had taken on.

And so, the reason I share this is, because sometimes we do have to draw a line around where we can make the most difference. Where we can have impact as a leader, in terms of what we create, and in terms of environment, and setting the scene and providing the right sort of environment for our team members to thrive in. But we can’t do it on our own. They have to take responsibility as well. Each person makes a choice about how they turn up every day.

Each person has to play their part. And if they don’t, then sure, you need to deal with that as a separate issue. But you cannot take on responsibility for the way that other people show up every day.

Instead, focus on where you have influence and impact, and make your difference.