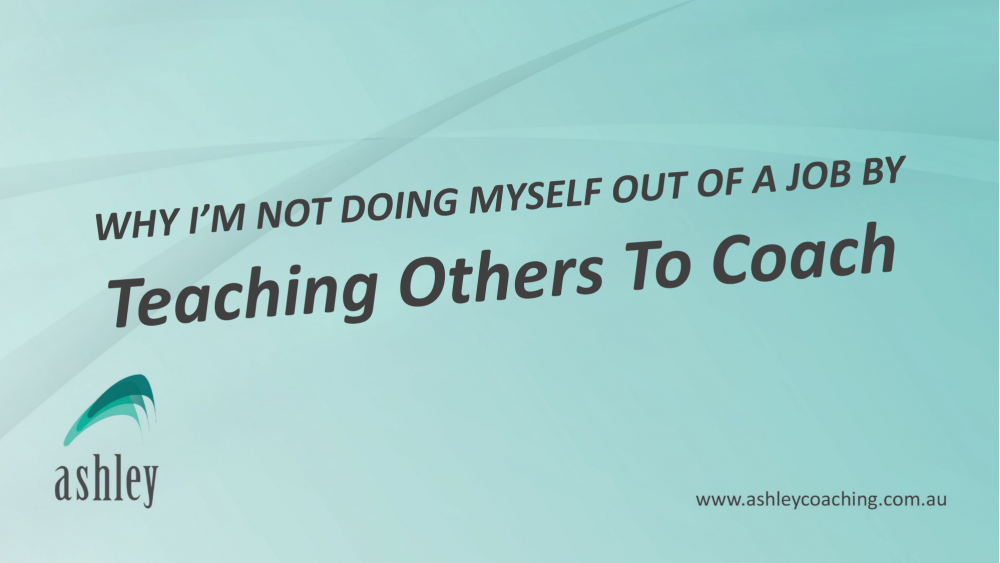 Hey, it’s Stacey Ashley here, and I just want to share with you. I was asked a really interesting question by a client earlier this week, which was, “Why do you teach people to coach? Doesn’t that mean that eventually, you’ll be out of a job?” And I did take a moment just to check in with myself, but the answer is no, I’m not doing myself out of a job. So, let me tell you why.

The first thing is, coaching is definitely growing as an industry. But really it’s tiny, and the number of coaches and the number of leaders who coach in no way match the number of coaching opportunities, needs for coaching, coaching moments. We’re not even close. So, for me, it’s still all about putting coaching skills in the hands of as many people as possible. We know that coaching creates great opportunities for people to make a difference for themselves, for the people around them, whether that’s at work, whether it’s at home, and so I just want to do more of that.

The second thing is that in terms of coaching in organisations, I’m a great fan of organisations building coaching as a capability, and that leaders should be coaching their people all day every day, using those coaching moments, coaching conversations, team conversations. They’re all coaching opportunities. And so yes, there should be more of that. Does that mean that external coaches are not going to be needed anymore? I don’t think so, I think there’s still going to be an opportunity or a need for external coaches to work in particular areas.

The other thing about teaching people to coach is, I know when I learned from people who are great at what they do, and I can list a whole lot of people that I have worked with over time, who’ve taught me a lot of really great stuff, I don’t tend to say, “Oh thanks, that was great,” and never talk to them or interact with them or work with them again. I tend to say, “Hey, that was great. Can I have some more?” And that’s been my experience, with the people that love your stuff, or that love my stuff, and what they learn is that they say, “Thanks. Can I have some more?” And so, am I doing myself out of a job? No. Coaching is like leadership, it’s a learning journey, and there’s always something else to learn about, to know, to put into action, and to integrate into your being. So, there’s always more. There’s always more, and more, and more.

And finally, in terms of teaching others to coach. If it ever actually did get to the point where everybody had coaching skills, everyone was coaching themselves, they were leading themselves, they were coaching others, they were changing their environments, their organisations, the systems in which they operate, and there was nothing left for me to offer in that space, I might just have a rest. Because that would be an amazing outcome, and I’d be totally, totally, absolutely happy with that. And so, after I had my rest, I’d just go and do something else that was really cool.