Leaders Must Champion, Develop and Grow Their People. For Who Else Will?

I long for the time when we don’t need to celebrate International Women’s Day.

A time when, while we might choose to celebrate, we don’t need to.

I don’t know why this year I seem to be more aware of my own responses to this dynamic, but I certainly am. Perhaps it’s because my own daughter will enter the workforce soon. Perhaps it is because I have experienced yet another small case of judgement based on being female in the last few months when a potential executive coaching client had no interest in meeting with me because I am female.

Leaders are leaders. It’s about what they do and how they show up and behave and think and feel and serve their people that make them leaders.

Of course, I will continue to go to those events and speak about leadership, but I long for the day when it’s simply a leadership event.

I’ve been reflecting on my own corporate career and some of the things that happened along the way. Trying to draw the lessons from my own history to share and to raise awareness, because I believe we all have a responsibility to create a world that supports people to find their strengths and live in their potential, rather than a world that stifles people and their potential.

When I was in high school, I held leadership positions at school. I had represented the school in at least six different sports. I was in all of the stage shows. I had won the citizenship award. And I had been first in my year, academically, throughout high school.

I had clear ideas about where I wanted my career to go after high school.

Like every student in Year 12, I had the opportunity to meet with the school careers counsellor to help me figure out my next steps following high school.

He gave me some advice that I still recall.

He said to me that I would make a particularly good secretary while I was waiting to get married. (This is a true story.)

Now, when I shared that conversation with my parents that night, they were understandably disturbed, disappointed, and distressed, on my behalf.

Every day, you have the power to choose our better history — by opening your hearts and minds, by speaking up for what you know is right.

The next afternoon at school, I was called back to have another careers session with the school career counsellor. This was not the norm.

He shared with me a different conversation. One where he asked me, what were the sorts of things that I was interested in? What had I thought of, in terms of my next step after high school?

And when I shared with him that I thought I might do accounting or economics, he gave me a whole range of information about the options at the different universities around Sydney, the different types of scholarships available and how I could access them.

Now, that information was useful to me.

So, what created the turnaround?

What created the change between one day and the next?

I didn’t know this at the time. I only found out a while later.

My father had visited the careers counsellor the next morning after our first conversation.

He went up to the school in his uniform, he was an army officer, and he made his presence felt.

I don’t know all of the details of that conversation, but what I do know is that my dad was my champion. And because he championed for me, I was given more opportunity to pursue my strengths, to fulfil my potential. And that made a difference.

I graduated from the University of Sydney 3 years later with a Bachelor of Economics, majoring in Accounting and Law, and had already secured the most sought-after finance graduate position available that year.

Following a highly successful corporate leadership career, I started my own practice to elevate the practice of leadership more broadly. 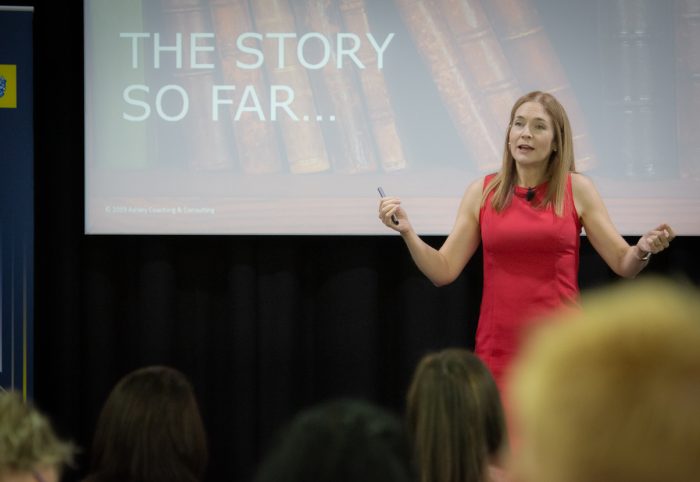 Every day I love what I do, who I get to work with and how I can help the world change. Yet sometimes I feel frustrated that although we have come far…we have far to go.

So, this International Women’s Day, I reflect on, how can I, how can we, champion each other?

How can we all support and encourage and develop and grow the people around us rather than stifling their potential?

Every leader must champion for their people. That is how change takes place.