To be or not to be…the Expert

A few weeks ago, I was coaching Rob and he was super frustrated because he was so busy and just couldn’t seem to get to his important work. When we talked about where his time was going, he said he was spending so much time with the members of his team supporting them, that all his time was used. So I suggested to him that maybe more of a coaching approach might be helpful. And he said, “But I’m already coaching them.”

When we explored a bit more, what I discovered is that Rob thought he was coaching, yet most of the time he was not. He said that he was always asking his team questions. So he would ask them a question and they would respond. Then he said, “Well, most of the time they don’t give me the answer I want, so then I tell them what they need to do.”

And right there, that’s Rob’s obstacle. He’s missing the opportunity to coach in the moment.

He’s not capitalising on the opportunity to coach his people up, so that next time they’re more prepared and more able to come up with a way forward that works for them.

A Work Human survey found that 93% of the people who believe they’re coaching need training on coaching their people. This is a huge opportunity.

It’s very tempting as a leader to be sharing your own knowledge and your own expertise. If your people don’t have the answer, then you can mentor them. And that’s great. But if you just keep giving them the answer all the time, then they’re not going to learn and grow their own capability and expertise. They depend on you. And that is limiting for each of you.

You have people in your team who have key responsibilities, and they are the ones who need to deliver on them. If you keep stepping in and effectively doing parts of their job for them, then they’re not going to be the ones delivering.

It’s like having a dog and then barking yourself. There’s no advantage in it for either of you.

If you really want to be a successful leader, you must develop other leaders around you. You must establish a team of leaders.

When you’re not tapping into the expertise of your team members, when you’re relying on your own expertise, there’s a potential that you will become the bottleneck for your entire team. If everything has to be funneled through you, then your team’s capacity is limited by your individual capacity. 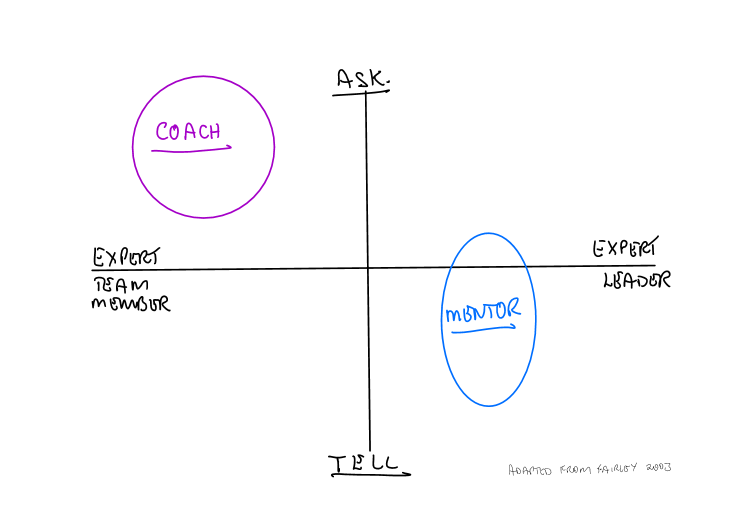 If you do that, then you create an opportunity for your people to learn and grow. Yes, you can still share your wisdom some of the time, and then coach through the application of that wisdom so that next time they are better equipped to deal with a similar situation or scenario.

This will mean you are released from the reliance on your domain expertise so that you can elevate your leadership, become more strategic and look at the big picture rather than only looking at the details of all the little pictures that make up each of the team members in your team.

If you want to reduce the demands on your time and reduce the reliance of your performance on your technical expertise, and in so doing elevate your leadership performance, then move from mentoring and telling to more of a coaching approach to create opportunity.