You need to expect more from your leaders (and self)

In a coaching session this week with May, a senior executive, she told me that her leader is not taking action on any of the things they had agreed as essential only a few weeks ago.

In a different conversation with John, he said that he hadn’t been able to get one on one time with his leader for weeks because their meeting was being canceled every week. And Jo said that her boss was basically ignoring her, or sent emails and messages so brief they could be construed as rude.

Are these real people? No, they’re not. But they could be because I hear comments like these all too often.

If the leaders in your organisation are operating like this, then you have or will have, a problem.

In Gallup’s study of managers, they found that “The manager accounts for at least 70% of the variance in employee engagement.”

You need to get real. If you want results in your business, and I’m sure you do, then you need leaders who actually lead.

People who set a standard of leadership and then raise it.

Leadership is not a license to do less. It is a responsibility to do more.

Leaders should be practising leadership, not languishing in a ‘leadership’ role.So why are so many leaders ‘allowed’ to get away with behaviour and action that is not the action and behaviour of true leaders?

If as Sheryl Sandberg said,

‘Leadership is about making others better as a result of your presence, and making sure that impact lasts in your absence,’

why are we not calling out people who are not demonstrating leadership?There are insufficient consequences. In fact, leaders with less than stellar leadership practice are often promoted.

Let me say it again. There are insufficient consequences when leaders do not practise leadership. There is little to no incentive to elevate the practice of leadership.

You need to expect more of your leaders, rather than letting them get away with less. Insufficient expectations and lack of consequences will impact your leaders, your people and your organisation…and not in a good way.

Is this about all leaders? Of course not.

Though there are still too many for which this is relevant.

How many comments have you heard about leaders who don’t listen, or cancel one-on-ones, or don’t trust their people, or don’t share information, or fail to recognise priorities, don’t acknowledge inappropriate workloads, have poor communication or fail to behave as leaders.

You need to expect more of your leaders.

And you need to expect more of yourself.

A fundamental responsibility of leaders is to create more leaders. That means creating a focus on the practice of leadership, rather than the title or the role.

The practice of leadership starts with you.

You wouldn’t choose to work with a Personal trainer who didn’t take care of their own body. Why would people choose you as their leader if you aren’t being a leader of self? 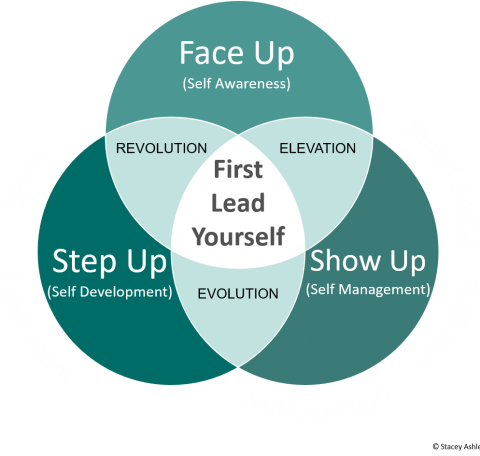 Be a role model of leadership and start with yourself. Practise leadership.

This is about growing your awareness of self. Know yourself. Learn yourself.
Hold the mirror up.

Until you are honest with yourself about the state of yourself and your leadership, you have no foundation to grow from.

This is about self-awareness.

This is about being the best version of yourself every day.

This is about self-management.

To step up is to raise the bar for yourself.

This is about self-development.

You can choose to create your own leadership elevation, evolution, and revolution by actively focusing on your practice of leadership. Face Up, Show Up, Step Up and First Lead Yourself.

Then ask others to do the same.