Here is One Example of Great Emergency Leadership. What Can You Learn?

I was on a Qantas flight travelling home to Sydney after a big holiday in the US. Three weeks of New York, skiing in Utah, and generally having a good time. It was well into the flight on the way to Sydney. The middle of the night, probably 3:00 AM. The cabin was dark. It was quiet. Most people were sleeping.

Suddenly the lights in the cabin came on and the captain came over the loud speaker telling us that he was making a change to the flight plan. He said there was an indicator light flashing on the dashboard up in the flight deck, and as a precaution, they were going to land in Fiji.

There was no urgency in his voice.

Almost immediately, the plane made what felt like a sharp mid-air right turn and started to descend.

At this point, the flight attendants began to walk through the cabin, reassuring passengers, making sure that seatbelts were on, pillows and blankets were put away, seats were returned to the upright position and all hand luggage was stowed.

The plane continued to descend, and it seemed not long afterwards we were getting close to landing. Excess fuel had already been dumped at sea, and the captain again came over the loud speaker letting us know that we were going to prepare for an emergency landing.

The flight attendants went through the emergency landing procedures. All the passengers were in the brace position…me included. It was about 4am and was beginning to get light outside the plane. As we approached Nadi Airport, we could see the runway in the distance with the lights along the edges. As we got closer, we could see all of the emergency vehicles lining the runway. This was the first time I thought ‘this is really serious’.

The plane landed safely and  was hosed down with fire retardant foam. Shortly after landing, we could smell the aviation fuel in the cabin.

All the passengers were quickly escorted off the plane, across the tarmac, and into the safety of the arrivals terminal.

As we found out later, that flashing indicator light on the dashboard showed that there was a problem with one of the fuel lines on the plane. When we re-boarded the plane later that afternoon, after the required part had been flown in from Auckland and been fitted to the aircraft, the captain revealed that in fact there had been a four inch crack in the fuel line. So, it was a good thing he paid attention to that warning light on the dashboard.

We all survived and have a good story to tell of our smooth emergency landing.

But how did this happen? This was a real emergency. Although for most of the time, it didn’t actually feel like an emergency. It was a very controlled, very calm experience. It was only when we were smelling the jet fuel and we saw the emergency vehicles beside the runway did we realise how serious the situation actually was. 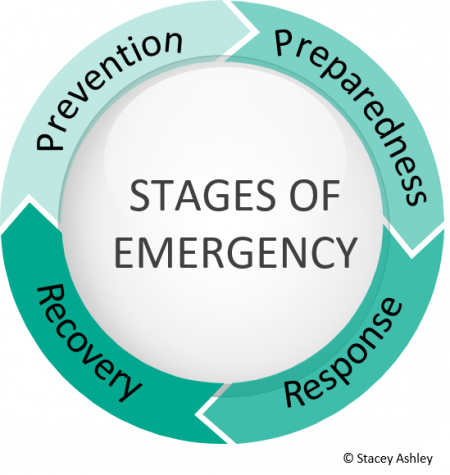 Qantas has an impeccable safety record, and one of the reasons for this is the focus on the prevention stage. This includes things like preventative maintenance, high quality engineering and a parts replacement strategy. I acknowledge there is far more to this than my limited knowledge covers here.

In this scenario this included:

The response was calm, capable, and confident. Everyone involved knew what to do and when to do it.

In this case for the flight crew, it was fly the plane and land it safely. The flight attendants focused on keeping the passengers calm and preparing the cabin for an emergency landing.

The captain was calm and clear about what was happening and what would happen next. The flight attendants were visible and accessible throughout the emergency until they too had to sit down for the emergency landing.

In this case, the flight crew and flight attendants had the capability already. It was building the capability of the passengers that was important, so everyone would know how to prepare for the emergency landing, and then what to do once we were safely on the ground. This was achieved.

Despite this being an emergency there was no flurry, no frantic activity, no hysterics. It was like a well-oiled machine. It was calm and led with purpose to get us safely through the emergency.

This included things like getting the parts needed to repair the plane. The parts had to be flown in from Auckland, New Zealand to Fiji the same day. Then the engineers needed to complete the repairs to make the plane flight-worthy.

Once the plane was certified, then the job was to gather up the passengers from the different hotels, assure them the plane was safe to fly and prepare them for the flight from Fiji to Sydney. It all went smoothly.

I’m sure there was far more in the way of recovery activity that all the involved organisations and people went through. And all the learning would have then been fed into the prevention elements of the cycle.

In reality, at any point we are running multiple emergency, disaster, turbulence cycles simultaneously. This is what it really looks like 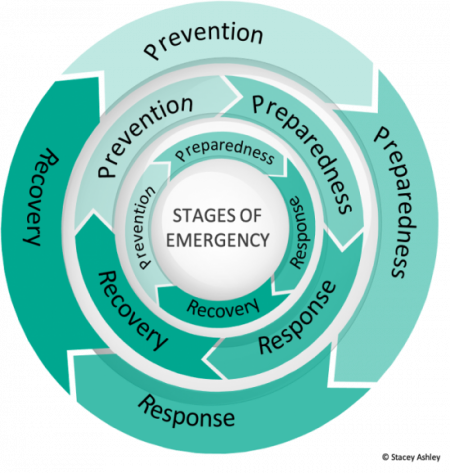 There are three things that great leaders do in emergencies. The first is they focus specifically and only on the important. The second is that they communicate consistently, and the third is they build capability.

All of those elements were here in this situation. The capability that the pilots needed to manage the emergency situation had already been developed and tried and tested, which then allowed them to do the other things that they needed to do. One, focus specifically and only on the important, fly the plane and land it safely. And two, communicate what was happening to all of the people involved, so that we knew we didn’t need to panic, it was under control.

Equally, the flight attendants knew exactly what they needed to do. They had been trained; the capability had been built. They communicated continuously and they focused specifically and only on what they needed to do, prepare the passengers for an emergency landing. Then they built capability in the passengers, making sure that we knew exactly how to brace and what to do immediately following the landing.

‘Some people don’t like change, but you need to embrace change if the alternative is disaster.’

This was an extreme situation, not one that too many people have experienced. Yet we all find ourselves in another extreme situation right now with a global pandemic and all of its consequences, and leaders here can learn these lessons.

One, we need to prepare. Build capability now, so that your people can handle the situations. Both current situations, and those that are yet to come. We will have continuous change and transformation for many years yet, so we need to have our people ready to be able to contribute to those different situations with competence, confidence, and calm.

Keep communicating, be visible, build trust in your leadership by making sure that people know that you are there and that you are keeping the channels of communication open with them.

Then focus specifically on the important, where you can make a difference, where your unique strengths and talents mean that you will be able to lead your particular situation.

‘Earn your leadership every day.’

Stick to the basics. You have got this, but you need to focus on those three core elements in order to prevent, prepare, respond, and recover.

We will all be doing all of these things continuously over the coming days and weeks and months and years. But the more that we can focus on the three core elements of specific focus, communication, and building capability, the better equipped we are going to be to lead through the different stages of emergency, crisis, turbulence, and transformation that we’re going to face in the years ahead.

Whatever part of the cycle you find yourself in, what do you need to focus on most right now?